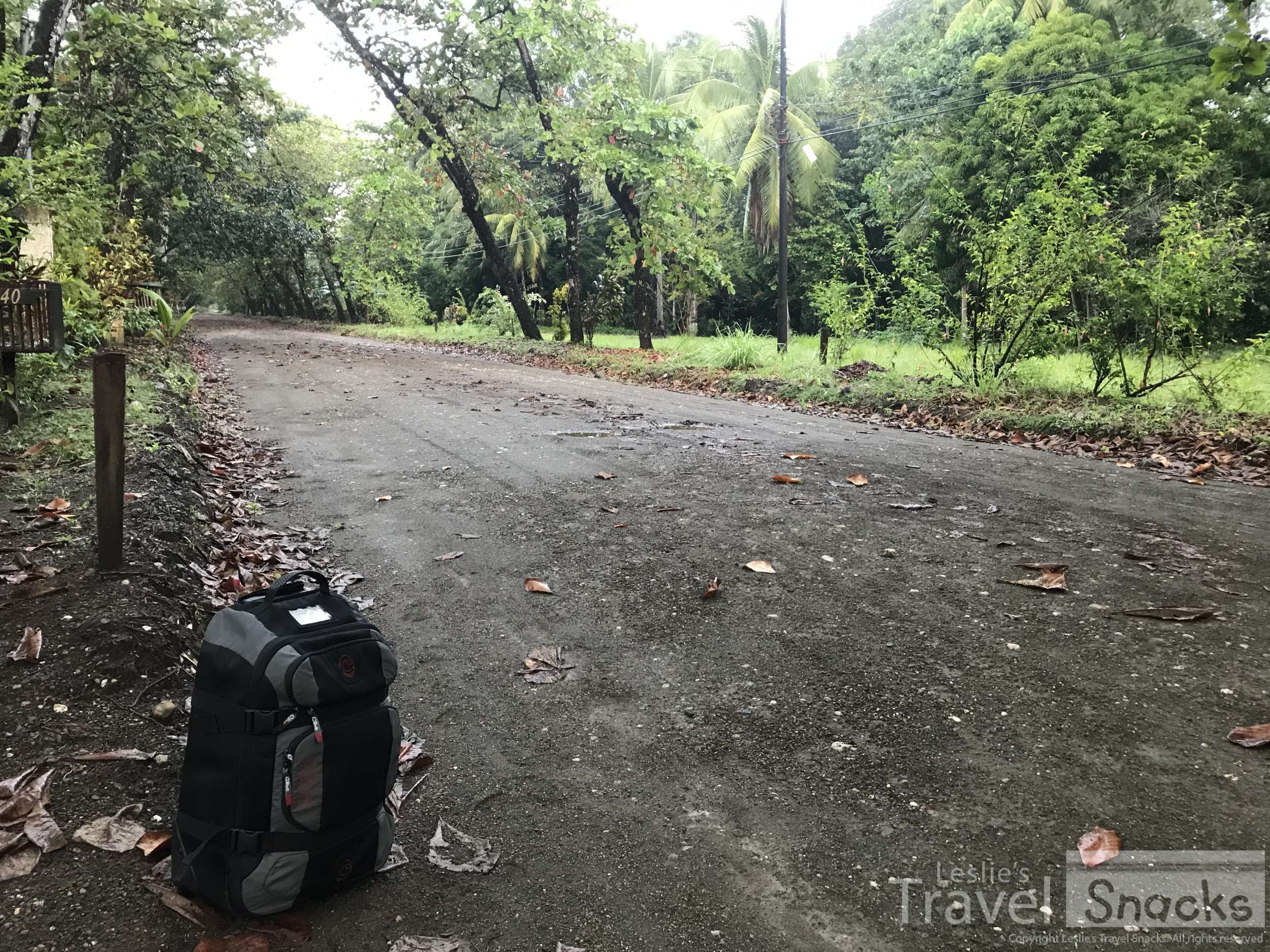 Me and all of my belongings waiting for the early morning bus to come down the road.
I left my home in Playa Zancudo this morning a bit nervous about doing this big travel day alone. It's so much easier to have somebody else to travel with and say "do you think this is the right bus?", or laughing, "how much do you think we overpaid for that bus?".

I got out to the main (only) road by 5:45 to wait for the bus. What a quiet morning on this long straight dirt road. Once in a while someone would come down the road either walking or on their bike, just to briefly come into my life for a "buenos días" then to disappear down the road in the other direction.

I successfully got the first bus (an old school bus type out of Zancudo). Honestly my biggest trepidation was getting up my heavy bag up into the bus. I also worried that the bus will be too full for me to find a spot to put it at my feet and I pictured myself bumping in to people with all my bags going down the aisle. But as luck would have it, there were only two other people on the bus so I grabbed the front seat and a woman helped me with one of my bags.


Once in a while a tiny dot will appear down the road. The tiny dot gets closer and closer until it walks by down the long stretch of road to become a tiny dot yet again.
The ride was beautiful. It was a super misty morning like you almost couldn’t see where the road went. We passed fields full of spiderwebs covered in morning dew and strung horizontally between the grasses. It was like a spiderweb farm. Then I started seeing them on the barbed wire fences. So you have these rustic fences made out of trees and barbed wire, decorated with dew-laden webs. It would have been a photographer's dream. Of course there was no way for me to get a photo from my seat on the bumpy bus through the dirty window. Can I ask the bus driver to stop? Surely the busload of people wouldn't mind. LOL

Along the dirt road, they recently installed big aqueduct pipes under the road, but they didn't bury them enough. They're so tall that the bus almost high-centered on them! That and they were so steep and muddy slippery that we almost didn't make it over one of them. They have since re-installed them. 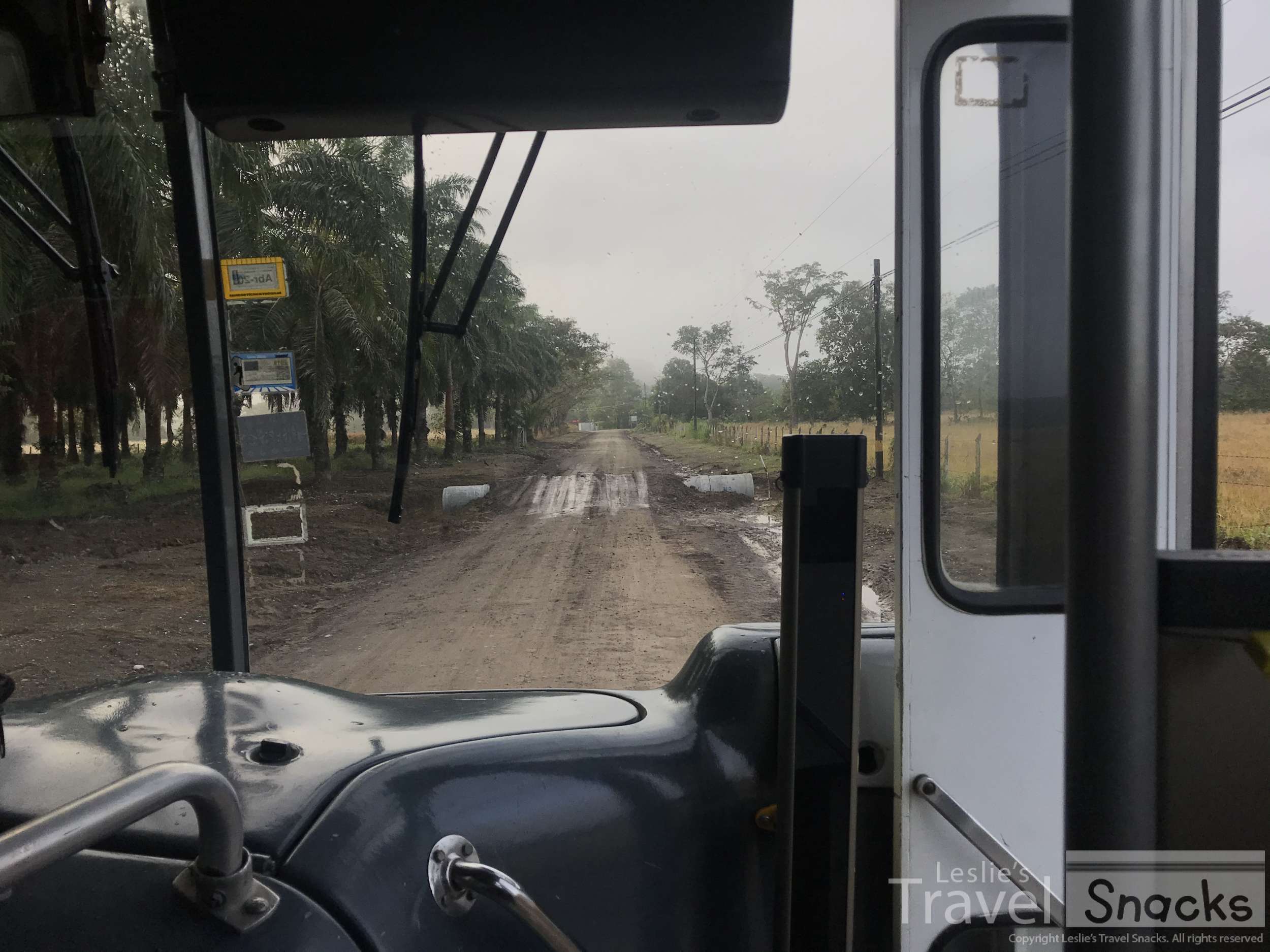 This isn't exactly the prettiest part of the ride, but I had to take a photo because the they had installed these aqueducts so tall, that we almost high-centered on them!
An hour and a full bus of passengers later, when the bus stopped in the small town of Comte, I was able to hop right off the bus into a colectivo taxi. Then the woman that was on the bus at first came over to share the taxi so I didn’t even have to wait until we got enough people to go. We only picked up one other guy on the way.

Arrived in Paso Canoas about 7:30am. Of course the 8:30am bus is full but the lady at the ticket window promises me that the 9am bus will get to Quepos on time for me to get my shuttle. I think I totally overpaid though. I know it’s more expensive because it’s direct but I feel like I paid to go all the way to San Jose instead of just to Quepos (10,400). It turns out that yes, you pay the fare for the full ride regardless of where you’re getting off! Maybe I paid 1500 for luggage???

Now I’m waiting by the immigration windows for my Tracopa bus. A green one, not a pink one. I think the daily group of immigrants are probably going to come this way soon crossing the border on their way to the US. Yep, at around 8:20 they came through like clockwork.

Daily immigrants coming across the border from Panama into Costa Rica, then getting straight onto a bus up to the northern border to head into Nicaragua. 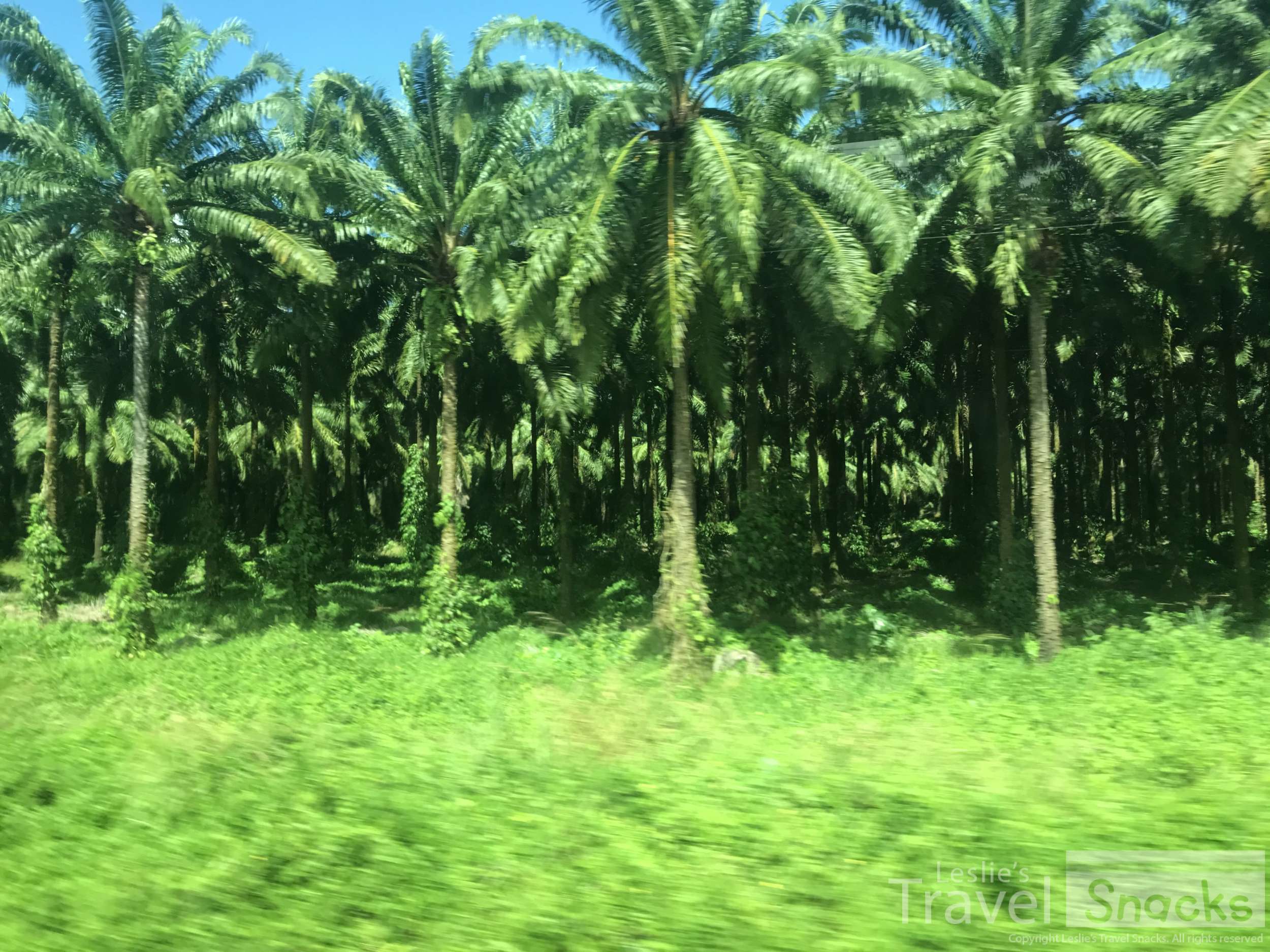 You pass by tons of palm oil plantations in Costa Rica.

Wow, it feels so different here in Quepos. So many people speak English and there are proper little American cafés, ice cream shops, and a best Western Casino (where I’m supposed to wait for the shuttle).

I got here to the meeting spot at about 12:45. Not bad timing at all. Of course it turns out that the 9:30 direct bus I was on doesn't actually stop in Quepos. So they just dropped me on the freeway and I had to get a taxi for 2000 colones. It’s more money, more money, more money. I said something like that to the taxi driver and he just said "Welcome to Costa Rica!"

There are not only a lot of gringos here, but there are gringo birds too - pigeons! 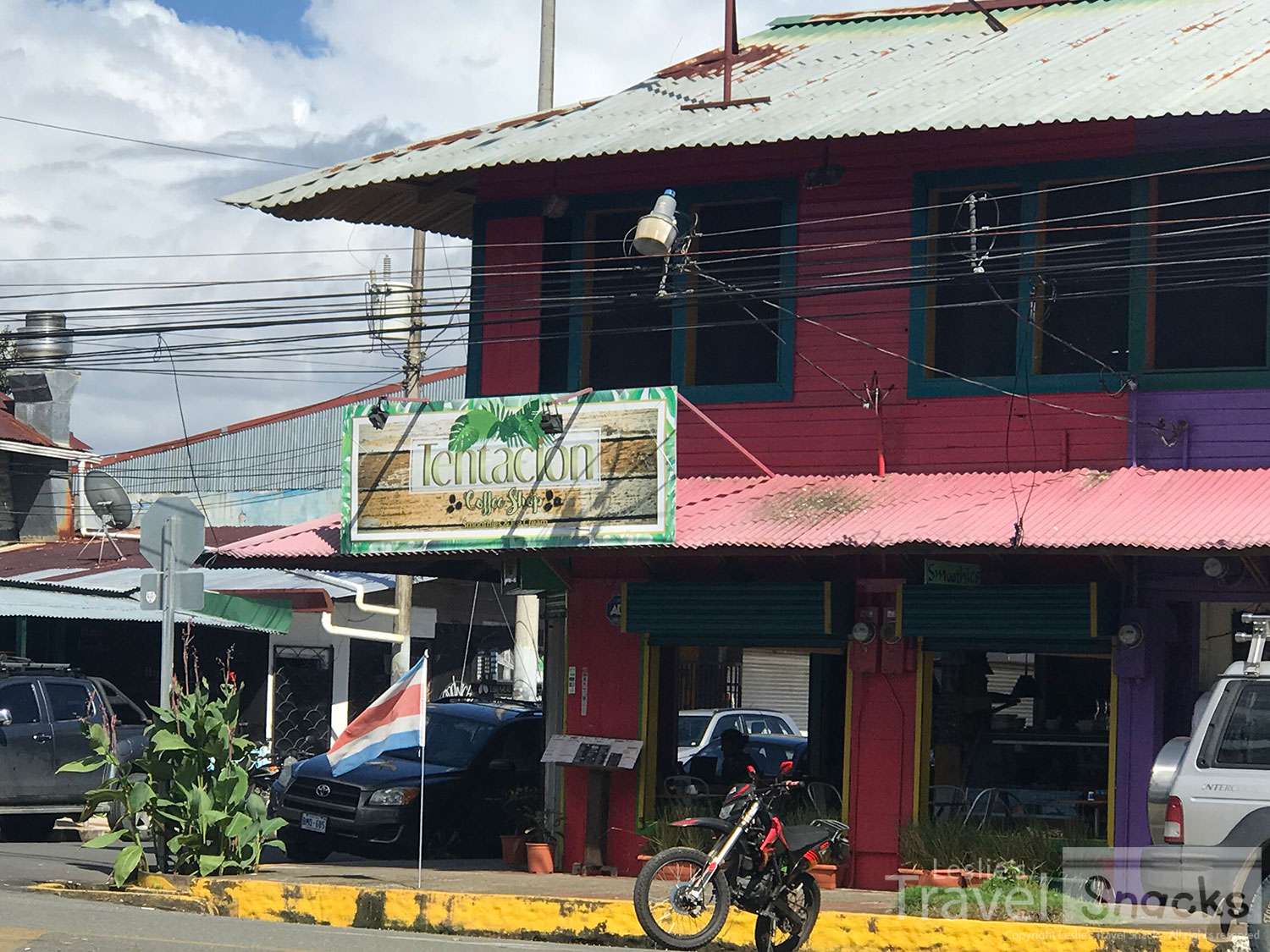 Walking around a little, I found the bus terminal and saw some shops and restaurants.
After I walked the malacón a little bit, I ate my packed lunch on a bench where I could watch the front of the hotel / casino where I was to meet my shuttle. A cricket just landed on the front of my tank top and got caught in the bra of my top. I got it out of the bottom of my shirt without too much trouble but I had to laugh. I didn't have to wait long until a guy came across the road asking if I was Leslie. Cool, he was early! And despite this being a somewhat crowded area, he found me no problem. Off I go!

What a great ride on the shuttle. Interesting Stops Along the Coast Highway in Costa Rica.

See Getting to Monteverde from Southern Costa Rica for options and details on this route.

Submit Your Comment
Hi, I'm Leslie and here's the blog part of my site. I'm laying it all out there. Read my (sometimes over) emotional journey through traveling alone and experiencing life out there in the world.