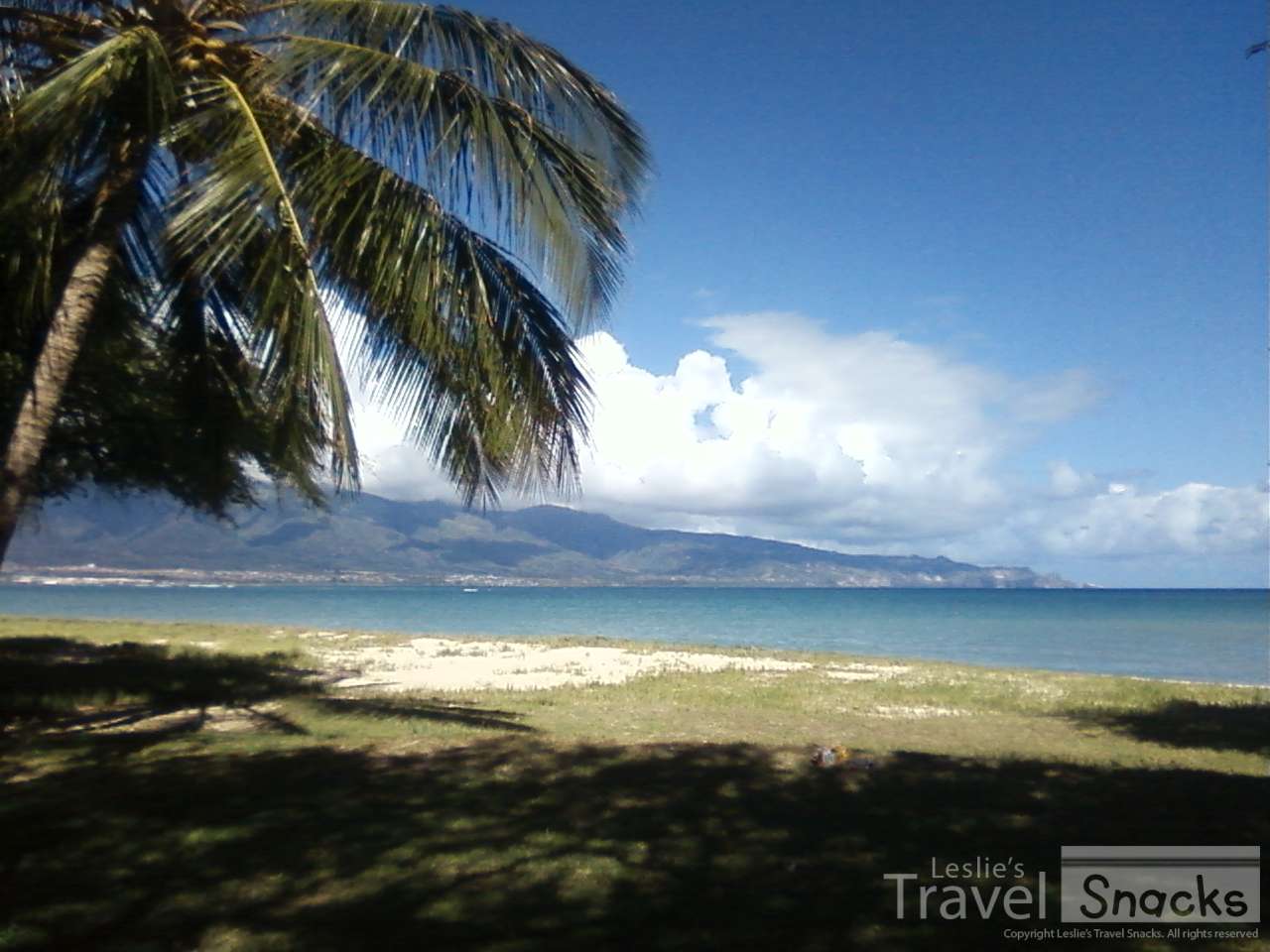 We had a hard time flying out of Hawaii on standby so we made due by sleeping in the car and hammocks on the beach. << old website quick post >>
Old posts from my very first travel website!

Tues - No way we were getting on the flight today (way overbooked) so we paid for another night at the Rainbow and did some shopping at the mall. It didn't take us too long in the local park to get Steve's lines untangled, so we went back to Kanaha for the standard hour of afternoon kiteboarding (sun and reading time for Leslie). 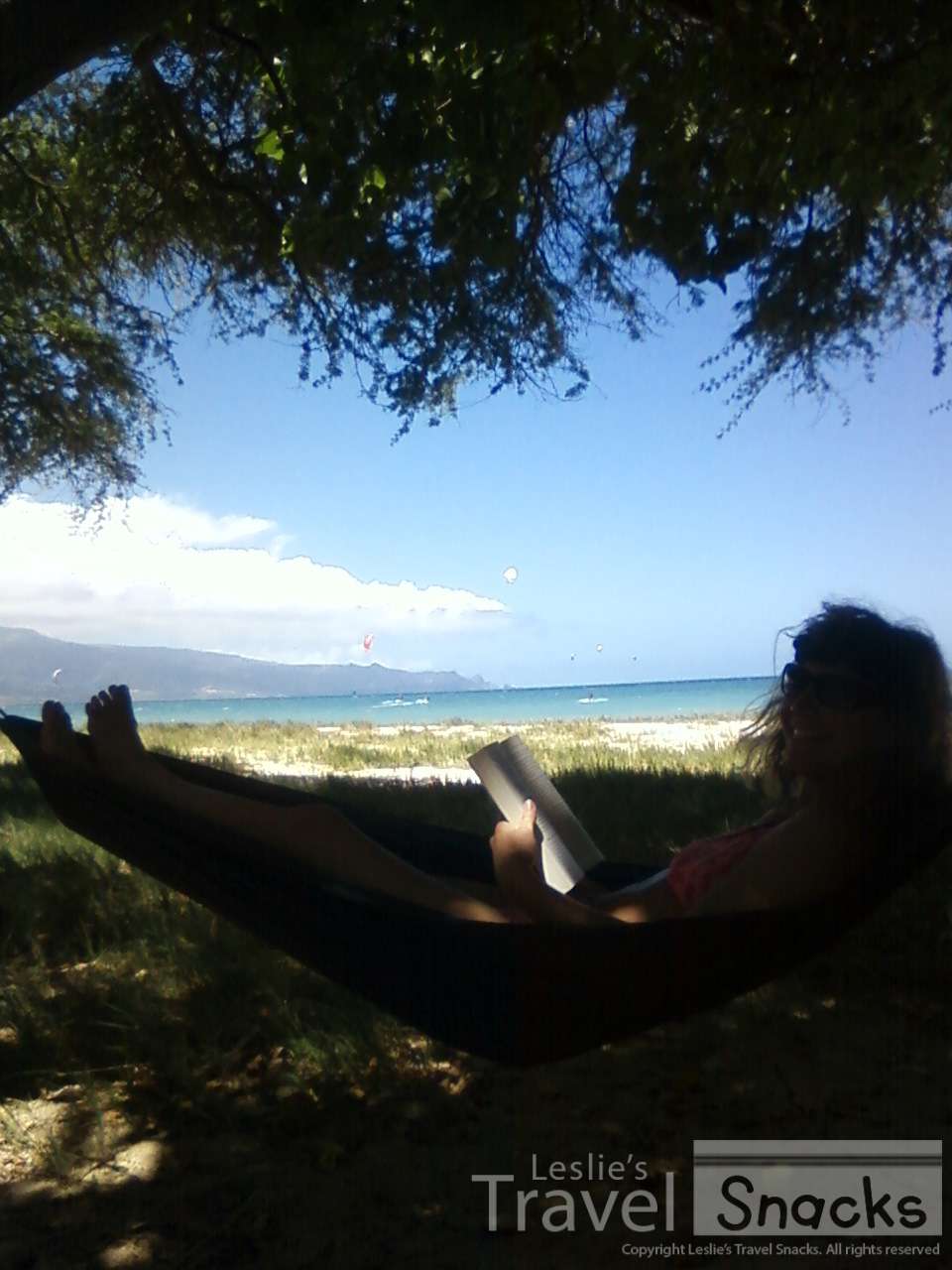 I spent many an hour here in this hammock on Kanaha beach while my (now-ex) indulged his obsession.
Wed - We finally checked out of the hostel. We'll miss little Rocket dog but sure won't miss that thin, rock hard futon or the roaches in the kitchen. Homeless for the day, we spent it at Kanaha in our usual spot with the big rock and perfect hammock trees.

We tried for the 9:15pm flight but it filled up before they got to our names on the standby list. No prob - we decided to sleep in the car. But of course we got some wine first which really helped us sleep well.

Thurs - With decent hangovers, we drove to the nice little beach just south of Lahaina and slept in our hammocks for a couple of hours after eating the disgusting pear and coffee flavored Yoplait yogurts that were on "introductory flavor" sale. Blech. Slightly recovered we drove to Hanalua Bay just north of Kapaulua. What great snorkeling! Lots of hard corals and lots of fishies including a school of hundreds of silver fish that let us get really close. We didn't stay too long though since all of our belongings are in the car now and there were notices all over the place of many recent break-ins.

We utilized one of the ubiquitous fresh waters showers that are at almost every beach and spent the rest of the afternoon wandering around Lahaina. Leslie got a super cute short dress that supposedly configures 100 different ways, and Steve got some board shorts at the ABC. After a sunset happy hour at the historic Pioneer Inn overlooking the water, we're now back at the airport looking at yet another very full flight with a ton of standby's ahead of us on the list. Wish us luck! 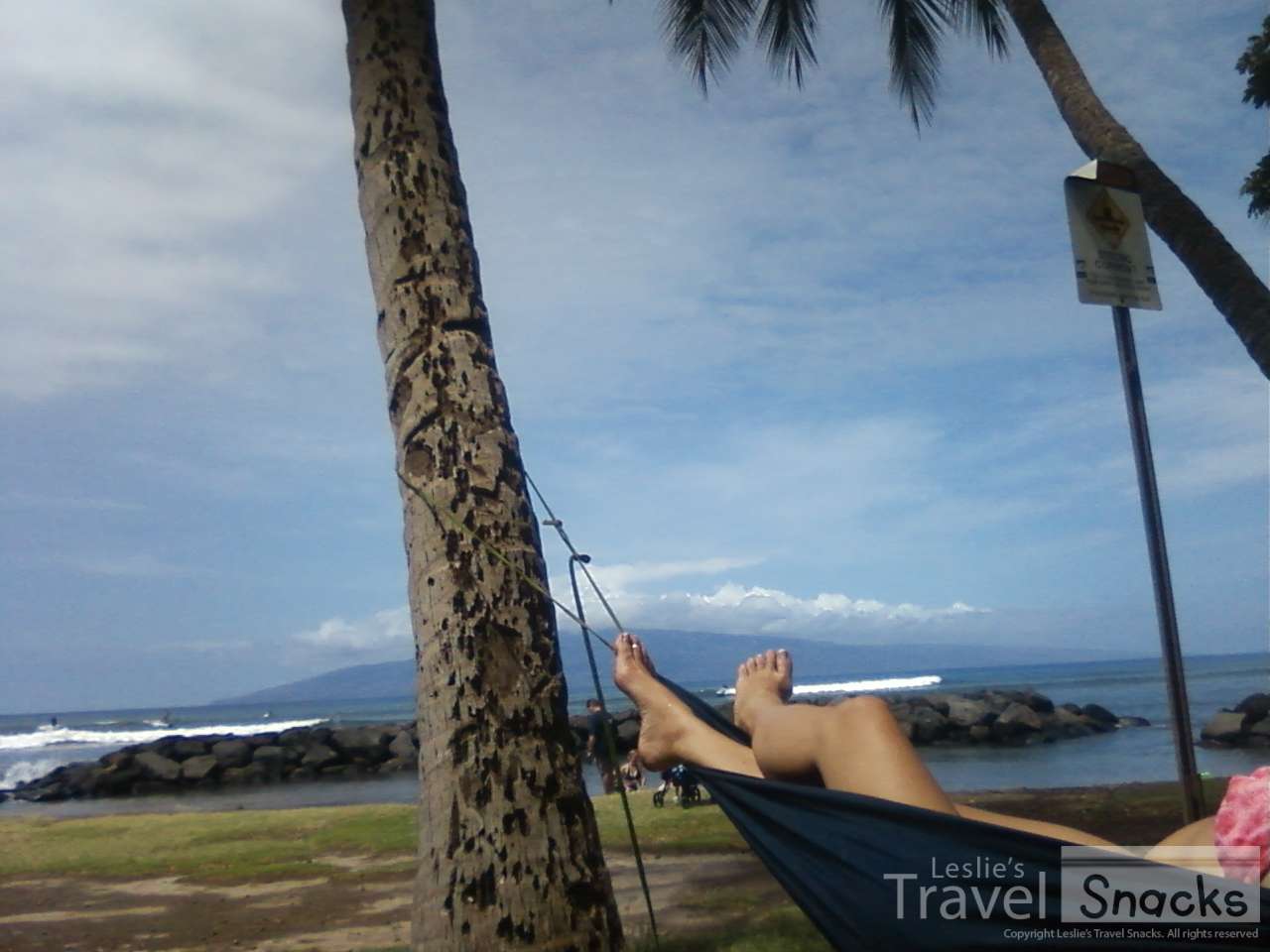 A nice place to get a bit more sleep after spending the night in the car.
Friday, Sept 11 - Well shit. They called us for standby for the one remaining seat last night. ONE. We decided not to split up. Turns out the flight tonight looks much better than the previous ones, so we might actually get out of Maui tonight. Maybe nobody wants to fly on Sept 11.

We were so exhausted last night after the airport. We had them send our bags ahead and after a few unsuccessful tries at Pricelining a hotel, we just slept in the car in the Wal-Mart parking lot. Ahh, no roosters waking us up plus we got to use their clean bathrooms and buy breakfast from the grocery section. We did wake up to a flat tire which Steve changed while Leslie shopped. Today we are attempting to stay within our retirement travel budget of $50/day. 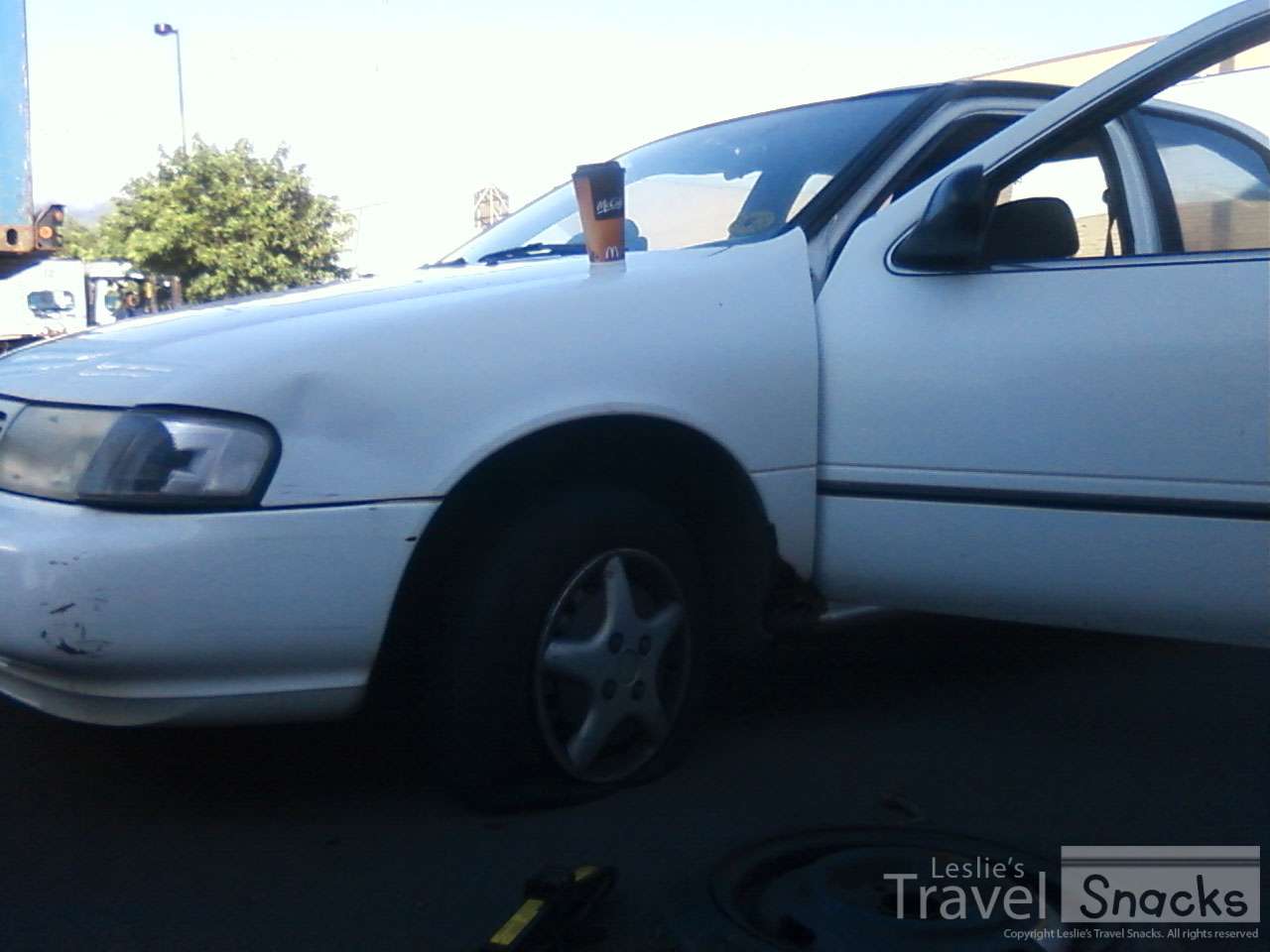 We got in another nice nap at Kanaha, then took a shower (even shampooed our hair) in the middle of the park in our bathing suits. Boy did it feel good. Then Steve had the brilliant idea of lunching at Costco! They have such good deals and the free samples were a perfect dessert. Border’s books turned out to be a good air conditioned place to get free internet and work for a few hours. Then we got some free Odwalla drinks and bars in exchange for putting the local radio station’s bumper sticker on our car. Sure, no problem. It’s that piece of shit over there. Ha ha. I sure hope the rental car guy likes it! To stay within budget, we hit the value menus at Wendy’s and Taco Bell – now we both feel sick. 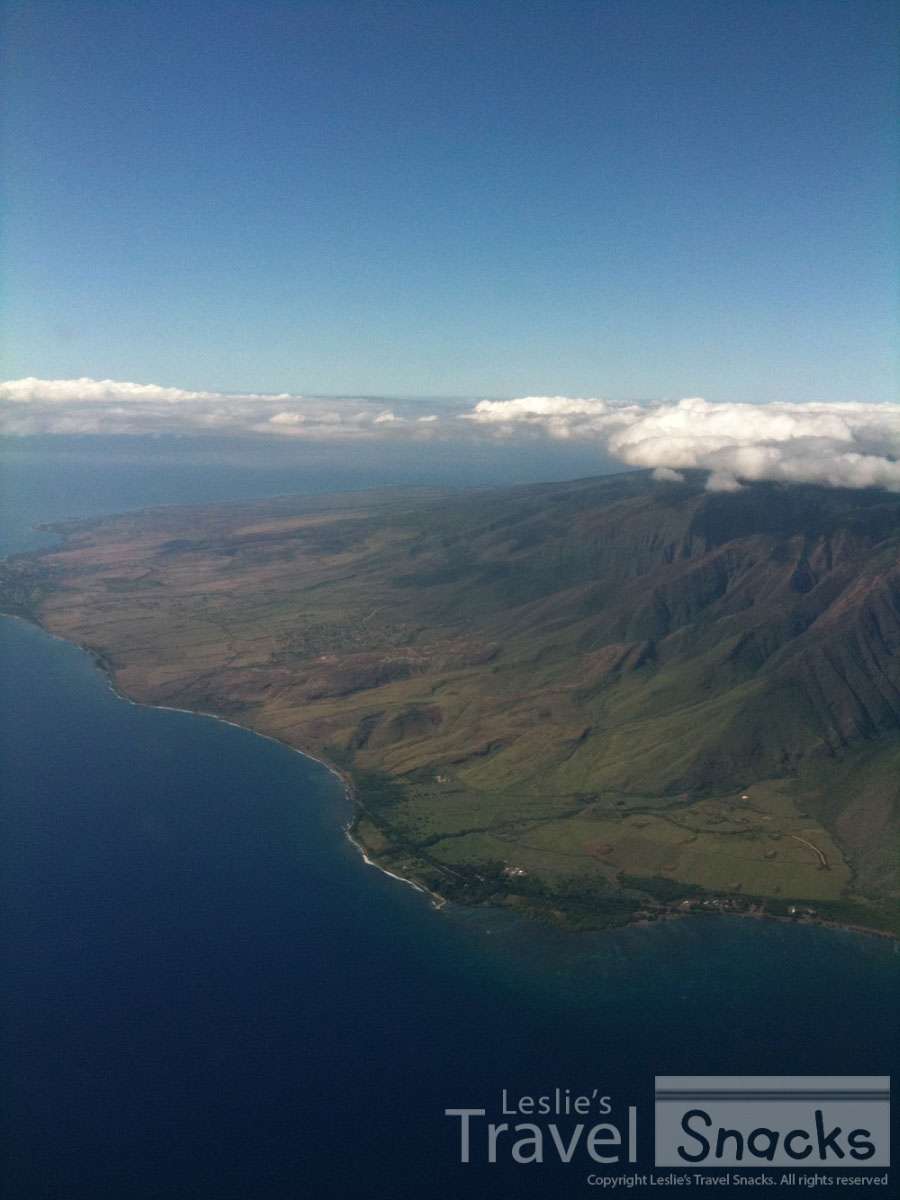 Sun, Sept 13 – We made the flight Sept 11 from Maui. then missed the 2 flights out of LAX (6 hour layover) which made us miss our connection from Salt Lake to Albuquerque. But the 5 hour layover in SLC was great since Leslie’s sister Michele came down for a visit! :) Then we FINALLY got to Albuquerque at 10pm where we got a Priceline hotel and slept like the dead. Got home around 6pm tonight. Whew!

We actually hiked all the way to the bottom and stayed a few days in July!

A Bit of Sightseeing

Took our little rental car around Maui to see some of the sights. << old website quick post >>

Top 5 Ways to Start Travelling on a Budget

Best Places to Eat Around Monteverde