Everything You Need to Know About Labuan Bajo

On the way down into town from the airport.
Know what to expect during your stop-over, things to do in Labuan Bajo, and how to get the most out of your visit to LBJ.
Labuan Bajo (BAH-jo, not BAH-ho like you would pronounce it in Spanish) is not the most exciting town in Indonesia, but is one that attracts the majority of visitors to the beautiful island of Flores in Indonesia. Flores has a lot to offer and is a great place to explore, but the big draw is the Komodo dragons.

Labuan Bajo is the jumping off point to visit the Komodo National Park to not only see the giant lizards of the same name in their only natural habitat in the entire world, but also visit pink beaches and swim with manta rays. (See Booking a Komodo National Park Tour - What You Need to Know)

It's true what they say about this being a dusty little port town. It's a bit boring after a couple of days but there are some interesting things nearby to keep you busy before and after your Komodo tour.

The pretty bay at Labuan Bajo. Fish market area on the left and Komodo tour boats in the water.

The first thing you need to do is get there. From Denpasar, you can book one of the multiple daily one-hour flights directly to the Labuan Bajo (LBJ) airport for roughly $50 USD each way. There are boat options to get from Bali to Flores but from the research I did, they are more expensive, super slow, and not very safe.

Flying over the islands in the Flores Sea on the way to LBJ is beautiful.

Landing at LBJ, you feel like you might just land in the water!
The airport is not far from the town. You'll get the usual barrage of taxi drivers shouting at your when you exit the airport. I chose a guy shouting "ojek" since I only only had a daypack and a motorbike would be just fine. You can get an ojek (motorbike taxi) for 10-15,000 rp but be warned, they might start at 50,000 rp!! I was not in the mood to haggle too much so I actually ended up paying him 20,000 rp but I got my ride back to the airport a few days later for only 10,000 rp.

Could you walk? Yes I think you could do it in about 25 minutes. The roads are small enough and there are only a few small hills. There are some one-way roads so the bikes have to go North to loop around to get into town. But if you walked, you could go South and cut over to the middle of town. Google's walking route from Labuan Bajo Airport to Bajo Nature Backpackers is a good path to follow.

It's surprisingly not a very touristy, wear shorts and a tank top kind of a town. It's a standard Indonesian town with the addition of a tour kiosk every other building. It's the type of town where you wish you were wearing a t-shirt that says "No, I do not want to book a tour with you." The main drag is about half a mile along the water and consists of mainly hotels, tour shops, a few restaurants, and the nightly fish market.

There's no beach and the waterfront has a lot of shipping containers so it's not exactly lovely but there are some very nice views of the sunset from the fish market.

There are plenty of little mini marts so you can get whatever you need here. There are also plenty of ATMs although they're not always all working.

When I there in 2019, there was a massive monstrosity of a hotel and shopping center going up right in the main center and taking a chunk out of the skyline.

The main drag in Labuan Bajo.

You can catch some pretty sunsets and watch the local guys fish with nothing more than a line wrapped around a can. (that's me)
There's a great place to eat right next to Bajo Nature, called Rafael's Kitchen. They have cold beer and local food at reasonable prices and if you are staying at Bajo Nature you even get a discount. Oh and if you fancy a proper latte, ask for one at the desk of Bajo Nature - they make a great coffee!

Bajo Nature has real coffee and lattes that they take great care in making perfectly.

Of course the obvious thing to do is to

. I definitely recommend at least a 2-day tour so you can enjoy the view at Padar, Komodo dragons, Pink Beach, and swimming with the giant manta rays. So get that in order, then you can enjoy the rest of what the town has to offer. Which isn't a ton but you can eke out some enjoyment while you're there.

You absolutely must go to the

on the North bend of Jl. Soekarno Hatta. You can't miss it. Every single night, even in the rain, the street vendors set up their stations, bring in the fresh fish from the day, and cook it up while you wait looking over the water enjoying a nice cold beer. They make a beautiful display of fish laid on a table in front of their cart with everything from lobster to squid to grouper and snapper. You choose your fish and they tell you the price based on the size and type. Then you talk about how you'd like them to prepare it for you.

There are ticket tables at each end of the road where you pre-pay for a certain amount of tickets that are fully refundable if you don't use them all. The vendors can't take money, only tickets. You can use the tickets for food and drinks.

I'm vegetarian and I even loved going there! Just ask and you'll find someone to make a vegetarian meal for you. I never really specified what I wanted, I just asked for vegetarian and they made what they wished and it was always good.

Cooking fresh fish to order over the fire. Grab a cold beer and enjoy dinner overlooking the water.
Most other "sights" require wheels.

for 75,000 rp/day ($5 USD) was easy. Getting petrol not so much. I rented the bike from a place a few doors down from my hostel. It was a rickety bike with floppy mirrors and bald tires and the helmet I grabbed was way too big. I had a good laugh in between moments of fear and praying for safety. You have to supply your own petrol and the stations are not close by. When I was there, there was some soft of petrol shortage so even the places along the side of the road selling petrol in bottles were scarce. I talked the guy from the rental into riding with me to find fuel before I headed out for the day.

Batu Cermin cave hike is an easy thing to do with a group or for solo travel.

is a good way to waste some time during the day. I only got lost once navigating the "big" city streets but the directions I was given were spot on. There's not much pomp or circumstance but there is a restaurant and restroom near the entrance. Pay your entry fee at the small wooden table.

I opted for a guide. He sort of spoke English. He told me a lot of facts about the plants and such as we walked to the caves but unfortunately I understood very little of what he was telling me. It's not like you would get lost, but I definitely would not have spotted the fossilized sea turtle had he not been with me! They also provide a flashlight and hard hat.

Supposedly at a certain time of day, during a certain time of year, the sun shines in a hole in the cave ceiling, illuminating the sparkly surface of one of the cave hallways; somewhat Raider's of the Lost Ark style. I was not their in either the correct season or the correct time of day and I heard that the sparkle is all gone anyway. But it's a nice limestone cave worth the nominal price.

Then I took the bike over to

because it's supposedly the nicest beach near Labuan Bajo. Well maybe it's the only beach because I did not find anything nice about it other than the beautiful views on the drive over there.

Regardless of how it looked, I went for a swim and lasted all of 2 minutes. The water felt like oil - I was out. It was disgusting. The drive from the caves and back to town takes you on some steep windy roads but the views are spectacular. Be very careful to watch out for oncoming cars and holes in the road. Once you go down the steep road toward the beach, turn left at the guard station to go to the beach area. On your way home, stop for a drink at Paradise BAR. 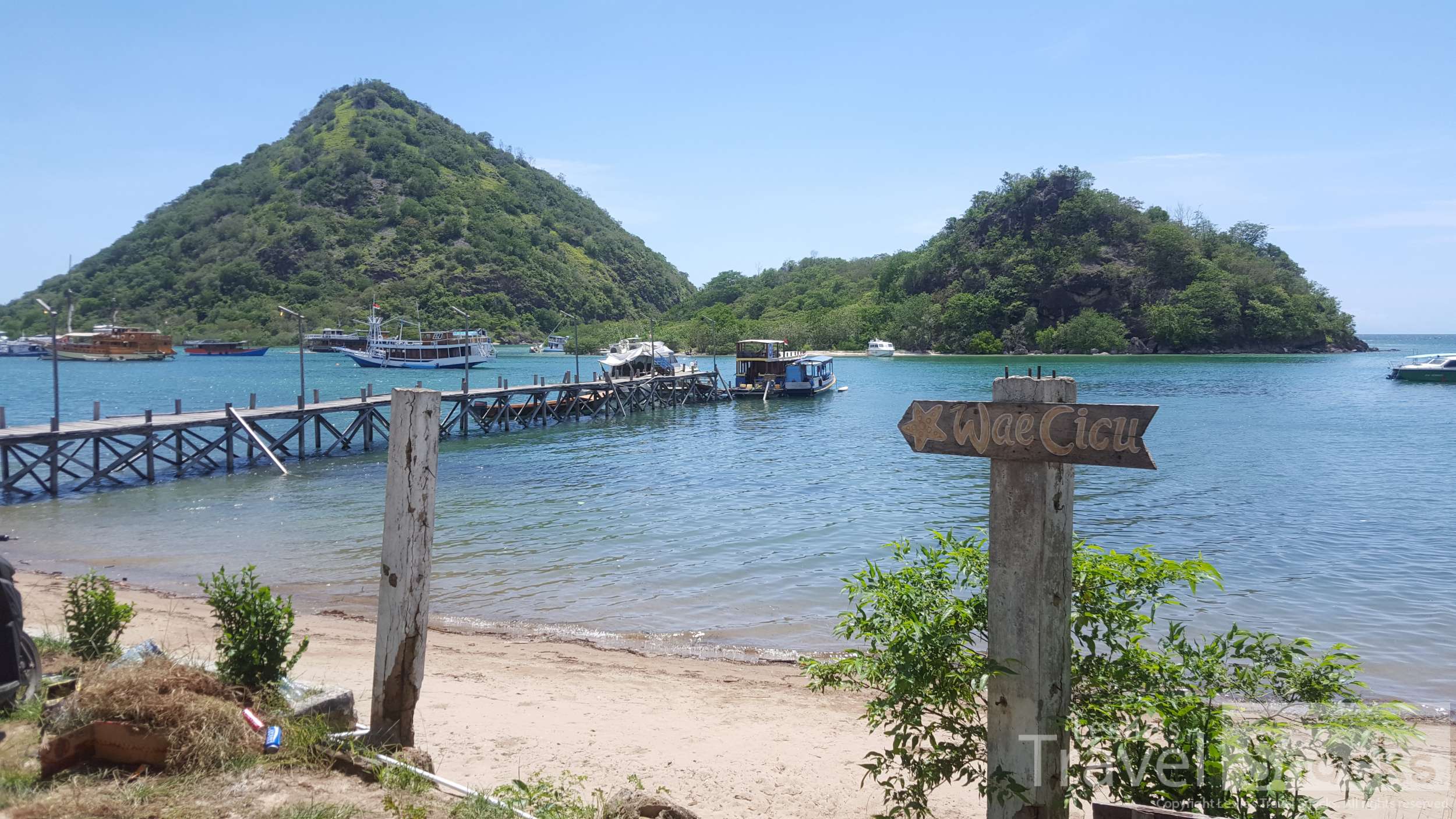 Wae Cicu beach, with the dirty water it's just not a great place to swim.

Looking at the small Wae Cicu beach.
There are other places to visit that are a bit further away from town. You can go swimming in

with it's distinctive conical roofs. There's even an island called

a 3-hour speed boat ride away where you can swim with harmless blue jellyfish.

A view from near Wae Cicu beach looking over the turquoise sea at Labuan Bajo.

There are low-cost options spread out around the town but I prefer to stay within the main area to easily walk to the restaurants and shops. I loved Labuan Nature Backpackers. It's a new place run by a wonderful family that really cares about how the place is run and how they can accommodate their guests. They have inexpensive dorm beds, private rooms, a beer fridge in the lobby, and free breakfast. Don't expect anything fancy but it's clean and reasonable.

Bajo Nature Backpacker's deck overlooking the main street.
Ciao Hostel up on the hill is a pretty popular place but I have no desire to make that trek multiple times a day. Le Pirate is really popular too and is in the heart of things. It's a bit pricey for my budget but they also have a very cool Le Pirate Boatel - Floating Hotel or stay on Le Pirate Island! Seaesta Komodo Hostel & Hotel is a nice hostel with a pool and you can get a dorm bed for $15 USD.

Bajo Nature Backpacker's is a great place to stay!

Looking up at the Ciao Hostel with fish market area on the right.

To Gili or Not to Gili

A review of the Gili Islands. It used to be one of my favorite places on earth; postcard perfect. Well the vibe sure has changed a lot!

Interesting Things to Know About Bali Before You Travel

A few random, possibly oddball things I learned while in Bali including customs and standard etiquette.

I won't regurgitate the same information that's already online (well, maybe just a bit), but here's a rundown of my personal experience extending my Indonesian Visa On Arrival in Bali.

Cancún on a Budget

Cheapest Transportation from the Cancún Airport